Did you know where the term ‘Bull’ and Bear’ come from?

The jargon of stock-market traders, a bull is someone who buys securities or commodities in the expectation of a price rise, or someone whose actions make such a price rise happen. A bear is the opposite—someone who sells securities or commodities in expectation of a price decline. Certainly a majestic bull and a powerful bear present striking images, but how did these two come to be associated with stockbrokers? And not only for stocks, this jargon is widely used in every financial instrument traded. To easily tell whether the market is going up or down. 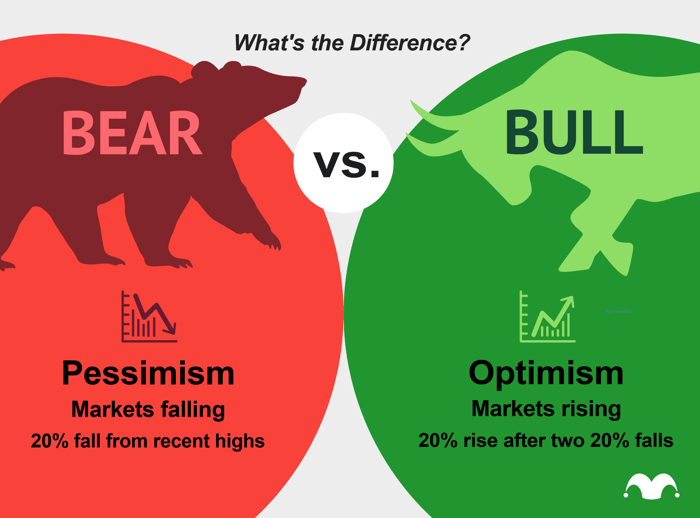 How did all of these animals end up in the finance industry?

The historical record is unambiguous: the bear arrived first, followed by the bull. The majority of evidence points to a proverb that warns against the temptation to “sell the bear’s skin before one has caught the bear” as the source of the expression (sort of like counting your chickens before they hatch, but with a lot more gore).

According to merriam-webster, this is the Etymology of ‘bear’ and ‘bull’ term. The bear came first. it is not wise “to sell the bear’s skin before one has caught the bear.” By the eighteenth century, the term bearskin was being used in the phrase “to sell (or buy) the bearskin” and in the name “bearskin jobber,” referring to one selling the “bearskin.” Bearskin was quickly shortened to bear, which was applied to stock that was being sold by a speculator and the speculator selling stock.

I fear the word “bear” is hardly to be understood among the polite people; but I take the meaning to be, that one who ensures a real value upon an imaginary thing, is said to sell a “bear”….
—Richard Steele, The Tatler, 1709

Thus every dissembler, every false friend, every secret cheat, every bear-skin jobber, has a cloven foot…
—Daniel Defoe, The Political History of the Devil, 1726

The bear sold a borrowed stock with a delivery date in the future that had been stipulated. This was done with the anticipation that stock prices would fall and that the shares could be purchased back at a cheaper price, with the difference between the selling and buying prices being retained as profit on the transaction. Many persons engaged in the South Sea Bubble controversy in England in the early eighteenth century employed this method of selling to make a profit.

In honor of the South Sea Company, which was established in 1711 to trade with Spain’s colonies in the New World, the South Sea Bubble was named in their honor. When the monarch was appointed as the company’s governor, South Sea stock became extremely valuable, and owners soon began to enjoy returns of up to 100 percent on their investments. In 1720, the business absorbed the majority of the British national debt and persuaded its investors to exchange state annuities for company stock, which was then sold at a significant premium to the market value of the shares. Speculators sold shares they did not own, and when the stock price fell rapidly, it resulted in a disaster for the firm as well as a tragedy for many of the speculators involved. Despite the fact that the word bear had been in use previous to the bursting of the South Sea Bubble, this event was responsible for its widespread use.

Another animal sign made its entrance in the marketplace around the same time period as the first. It was first used to speculative stock purchases made on the idea that stock prices would rise; later, the phrase was extended to the individuals who made such purchases. A suitable alter ego for the bear appears to have been picked for the animal. In the words of poet Alexander Pope, written in 1720:

Come fill the South Sea goblet full; The gods shall of our stock take care: Europa pleased accepts the Bull, And Jove with joy puts off the Bear

This eighteenth-century animal imagery caught on, and bears and bulls have been in the stock market ever since.